Democracy has four pillars, and an effective and intelligent Fourth Estate is one of them.  The Sydney media, all mastheads, have failed to be the canaries in the mine, the harbingers of 1923 all over again.  They were stunned by the lippy and the lingo, ignoring the professional yardsticks.  At the very least, all they count is cranes in the air, not the numbers of future citizens who will bear the costs and burdens that this sad pack of sheep will leave them.

And the sickest of the lot are the ones in the Menzies Club who protesteth so much.

The analytical framework gives us criteria, and the case studies give us evidence.  Together, the Sydney media, national and state, have done a great job of urban infrastructure, politics and parliamentary/agency crises since the NSW Coalition came to office in 2011.

The love affair should have had a honeymoon phase and stopped, why it reversed that is something the journos will need to explain as a separate issue to why the politicians screwed up so badly... 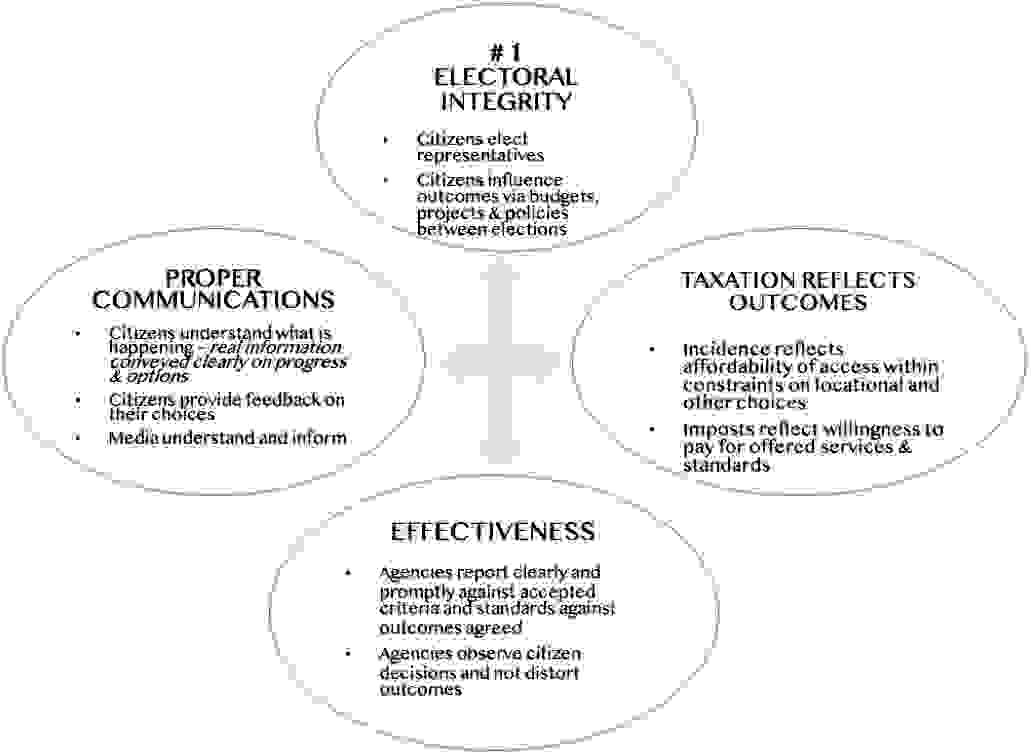 Media - right to know but refuse to listen?

The media alliance on "RIGHT TO KNOW" is making the same points as under the Bankstown Metro Summary Business Case - 110 redactions (100% of key data) disguised a dreadful lack of economic and financial viability BUT which was camouflaged by the Daily Telegraph's coverage.

"Right to be heard" is the critical element under the "Four Pillars" and the alliance has refused to contemplate extending their professionally-crafted ads into real-life examples.

Recent history is that the Economics Editor of The Age and the SMH received a series of leaked Cabinet documents which showed deceit and incompetence on the part of the NSW Transport administration.  He had a close relationship with the ABC TV and Radio teams and all refused to extend the discussion into the climate that led to such deceit and the remedies.  They materially disadvantaged "Save Sydney".

The bigger context is the “Save Sydney suite of reports, correspondence, websites, social media and op-eds – all based on accepted protocols as espoused by Greiner, Eddington, Schott, iA and iNSW when lucid, and UK and US “best practice” – there is nothing radical, ideological or empirically-incomplete or -inaccurate.

Media performance has not been acceptable - https://sydneyimprovementpolitics.com/bairdijiklian-big-lies

See the list the SMH has refused to acknowledge:  https://sydneyimprovementpolitics.com/the-value-proposition.  ABC Breakfast and weekend presenters undermined ReviveBlueMountains as explained under the Localism tab.

Timing is against the mid-Dec MYEFO which was corrupted last year and is now “fruit of the poisoned vine”.  Sydney's future in in balance and literally "children are dying" - see https://sydneyimprovementpolitics.com/cruelty-%26-deceit

The last genuinely professional journalism produced by Fairfax Sydney mastheads (not regionals and trade media, the shining exception being Jack Waterford) on these topics was, I suggest, done by Linton Besser and Andrew West in the last 2000s.

Criteria for such judgements were circulated 2 months ago:

Since, the Herald has run a few op-eds on WestConnex and the Metros, periodically, but otherwise has not achieved any “balance” or “fact checking” of note.  On the contrary, it has excluded “Save Sydney” as well as Greiner’s SIS 2012, and distorted community understanding through:

1. Putting a positive spin on the personalities and politics of Berejiklian and Constance, leading to the absurd conclusion at NSW Election time that “she has every right to be proud” of her infrastructure achievements

2. Denying the community of accepted standards of journalistic research Vs “Need to know”

3. Failed to reveal an unprecedented level of lies and deceit by Federal and NSW “political appointees” and cronies, including plagiarism – see links in next bullet

Only the Daily Telegraph addressed such issues, through an op ed commissioned by Joe Hildebrand and the famous “Liberal Bromance” piece by Andrew Clennell, both in 2012 – and not much else since except at Budget times.  It is otherwise as resistant as are the Herald and Fin.

The recent SMH story on transit options for green Square was appallingly  naive. 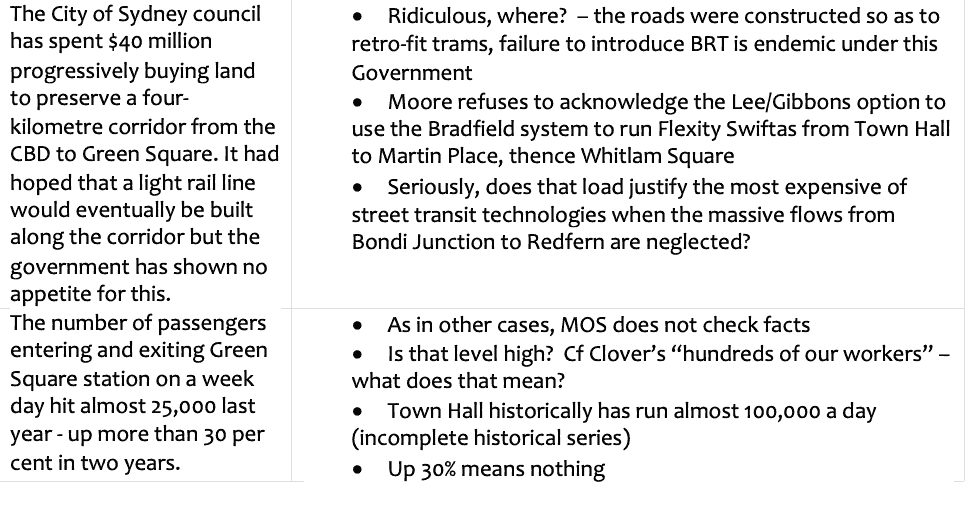 then comes the beauty - perro

background to the above

On 7 November 2019 the Sydney Morning Herald continued its record of not quite getting Sydney transport stories right.

The journalists do these stories periodically and from a helicopter perspective.  They have neither the on-site knowledge nor the corporate memory necessary to improve their standards.

There needs to be more connection between media and practitioners, as there used to be before the Herald turned insular about 10 years ago.

There are situations facing the NSW and Sydney polities which require - but do not receive - is eternal vigilance by the Fourth Estate:

There are points in history where journalism can be judged to have succeeded or failed in informing and raising awareness. In the 1950s and ‘60s “how could we prevent another Hitler” was a common question, and the answer could only be, “we’d know better, wouldn’t we?”.

Sydney since around 1917* was Berejiklian’s to tear up some 40 per cent of the Bradfield CityRail system – this was journalism’s worst period, which continues. It compares badly with Turnbull’s gifting of $8 million to a CLARA fast train which needed to be exposed as a con, and was.

However, not one journalist understands transport dynamics and can see through “busting congestion” and “transformative” lies. Intergenerational equity has already been smashed but no journo noticed. A superb editorial in The Australian in late 2015 has been forgotten, even betrayed, in News’ various mastheads; just as the SMH journos noticed only en passant that they daily betray the Ron Christie work that the Herald commissioned in 2009 at a time there was genuine competence in their recent reportage.

A recent Brooking report on congestion concluded that in the USA as here, “the ways in which we plan and invest in transportation continue to contribute to problems like congestion, lack of accessible and affordable transportation options, and a sprawling, unsafe, and ecologically destructive built form”.

Generally, the Sydney media have shown themselves to be incapable of understanding and unwilling to learn about the massive issues which lie beneath charlatans’ Press Releases and even informal or unlegitimised “decisions”. They have failed to be the “canary in the mine” for the safety of democracy in the face of fascistic manipulations. These notes are illustrative and designed to raise standards.

There are many assessment criteria in Sydney's and NSW's contexts as seen in Standards and the Aus's 25ers + Reforms Terms of Reference.  Generic heads are to be considered when reading the later media quotations.

Examples - see The Evol of Plagiarisms

Current politicians pull the names of past heroes out of the air with gay abandon – Bradfield, Menzies, Utzon, , the Sydney Harbour Bridge, the Snowy …. With nary of whiff of understanding. Generally, the mentions are crutches for spiffs who proselytise the exact opposite of what history tells us is “best practice”.

On 22 October 2015, Baird was reported in the Daily Telegraph as saying “We rightly think about Bradfield’s era as a transformative time for Sydney, but I believe right now we are entering an equally exciting era that will also mark the pages of history… There are cranes in the sky and shovels in the ground and we are hitting milestones on a regular basis. You don’t get that kind of progress without disruption, or headlines, but we will march on and not apologise or back away.”

Two years later the Minister for Transport, Andrew Constance, mused that while cost overruns and community damage were at extraordinary levels, the current engineering “genius”, Rodd Staples, was a “21st Century Bradfield”.

And so it was that the Tele founded the “Bradfield Orations” and recruited such people as Lucy Turnbull to advocate current directions.

The reality is, to true historians not parvenu enfants simpliste, Bradfield was NOT a driving force in Sydney’s transformation, it seems that neither Baird nor Lucy Turnbull, in their Orations, nor others, knew that the transformation was the product of two presiding genii in Sydney’s history, Sir Thomas Hughes as statesman, and John Daniel Fitzgerald as a world thinker as acknowledged in the UK, Germany, Japan and the USA.

They created what Professor Spearritt described as “a planning consensus” based on participatory democracy, franchise reform, sensible taxation and financing, and world-best thinkers including the great Sir Ralph Freeman, arguably the true designer of the Bridge. In the great symposium on Railway Electrification in 1926, the Railway Commissioner stated that the work was the product of a great team, for such was the quality of the Railways staff then.

Not one agency or journalist had pondered the cost of damage to the Bradfield system when I produced “The Berejiklian Model of Reforming Sydney’s Bradfield-Era Rail System” on 8 August 2016 (see download tab. It went to the PM and his Ministers, NSW Ministers, and journalists in Fairfax, News and the ABC – not one of whom took any action other than evasion. The same can be said of the Auditor General and ICAC.

The point was, as documented also in “The Case to Pause the Bankstown Metro”, there was a complete failure to observe iNSW and iA protocols, Treasury Guidelines, Eddington’s London and Melbourne transformative studies, or Commission of Audit recommendations.

These failings have been documented throughout the three websites and in correspondence since October 2012. We can see where O’Farrell, Baird and Berejiklian, Stokes and Staples and the Turnbulls failed to observe due diligence, where did journalists fail?

Here's the killer file that was ignored by all Ministers & agencies