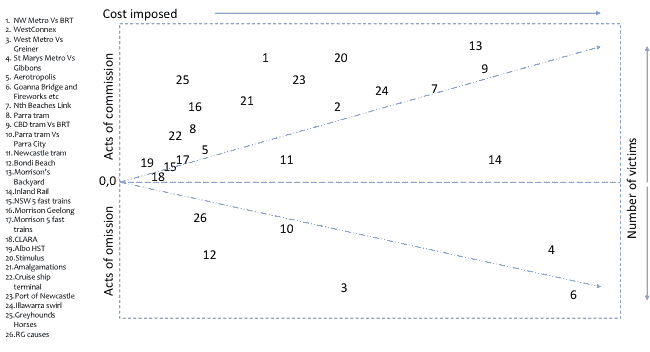 Intergenerational Equity is a profoundly important part of all systems of sensate thinking, and is enshrined in the legal constructs of Ecologically Sustainable Development (ESD).

Intergenerational equity means we pass on a better world than we inherited.  It also means that we don’t pass on dead debt to our descendants.  We don't force them to close "our" metros so that the tunnels and bridges can carry better trains - the massive expense is halving system capacity because of preventable design and engineering blunders.

The NSW and associated Federal Coalition Governments (mirrored by Labor) are breaching every possible guideline:

The essence of "planning" in reality has become meeting the unstated wants of lobbies and corporates.  Such politicians as the NSW Treasurer Dominic Perrottet occasionally burst out with an "intergenerational equity" sentiment but seem to have no idea that their policy obsessions are inherently damaging.

It is unusual on a world scale to see such thunderous failures of successive national and State governments to properly inform and engage tax-paying citizens, and to put "representation" in place for young and yet-unborn generations.

We are used to media takes of the PM high-fiving bemused children and of him walking with his own.

Federal and State governments have no planning feedback loops from infrastructure planning to community outcomes.  Affordable housing is a known critical defect in NSW.  This article is a good short explanation of the "why & how":

“How the Baird Government failed to make developers work for their millions” (SMH 5 Apr ’16):

Affordable housing is different to social housing. In general, it is targeted not at those on the lowest incomes but those on average incomes struggling to live in "global cities" such as ours.

"Basically what happens is that the development industry out-organises people who would propose these policies," says Landis of the experience in many US cities.

Developers are good at arguing, Landis says, that any extra imposition on them would drive them out of town and cripple the economy. In Sydney, developers have barely had to make the argument.”

We overwhelmingly found that young people place a huge value on fairness, equity and equality within Australia. Their attitudes and goals on important issues such as education, employment and housing are most often altruistic and aimed at creating a better society for everyone.

On critical issues young people are seeing widening inequality gaps within society as a whole, between generations and even within their own peer group.  They are also overwhelmingly disappointed by government's response to their issues, citing politicians' lack of vision and inability to listen to young people. They feel that governments are not acting in their best interests or the interests of future generations.

The Value Proposition tab contains a summary of project ideas (and table of potential savings) which are illustrated here as time impacts. The longer-term the project, the worst the inbuilt congestion and affordability impacts, the greater the impact on time-sharing of financing costs matched with benefits. A significant bone of contention with Sydney’s Harbour Bridge was that the municipal levy started in 1924, 8 years before the Bridge was available for use.

That was inevitable; but Berejiklian’s signature defect is that all of her projects are the most long-term and risky of all options, making her refusal to consider options and add massive extra elements to adjust her blundering, and iA’s and iNSW’s obsequious concurrences, all but grand maladministration.

Even Sir Eddington in IPA needs to listen to Eddo logic

The start point of the thinking in this report was in 1995 when the current author gained the approval of the then Cabinet to start a comparative corridor assessment; leading coincidentally to the Urban Transport Statement (below) –which showed the main corridors in Sydney Vs to gaps (congestion axes).

The logic was explained in Greiner’s SIS.  It was also charted this way in SUTP’s Sustainable Transport: a sourcebook for policy-makers in developing cities (2003 as updated), with congestion, equity and energy implications. Berejiklian's and Labor's (below) was always the worst of all worlds as Jim Steer showed in'08. 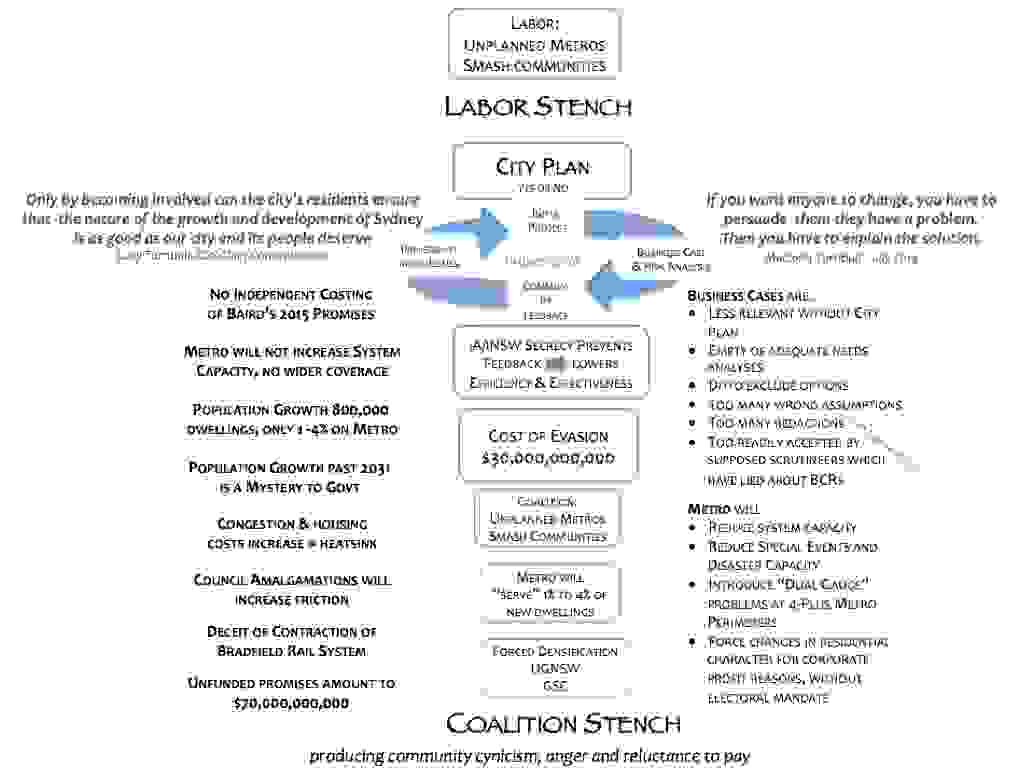 Faster, cheaper and more effective is the key to Intergenerational Equity

Other tabs show how this dreadful situation came about, including the politicisation and down-skilling of Federal and State executive structures, and evasion of due diligence (the "Baird Model").  The planning system that worked well for the Wran/Unsworth then Greiner/Fahey Governments was based on a logical hierarchy of state and local plans, with public inquiries enforcing transparency and engagement (in almost all cases).

The Grattan Institute's Roads to Riches valued the massive costs associated with evasion and described Berejiklian's approach as "negligent".  All she and PM Morrison can do is abuse Grattan's perceived political stance and thereby camouflage the substantive issues.

Intergenerational Equity can and will only be achieved by restoring the probity of the former situation (blue arrow below). 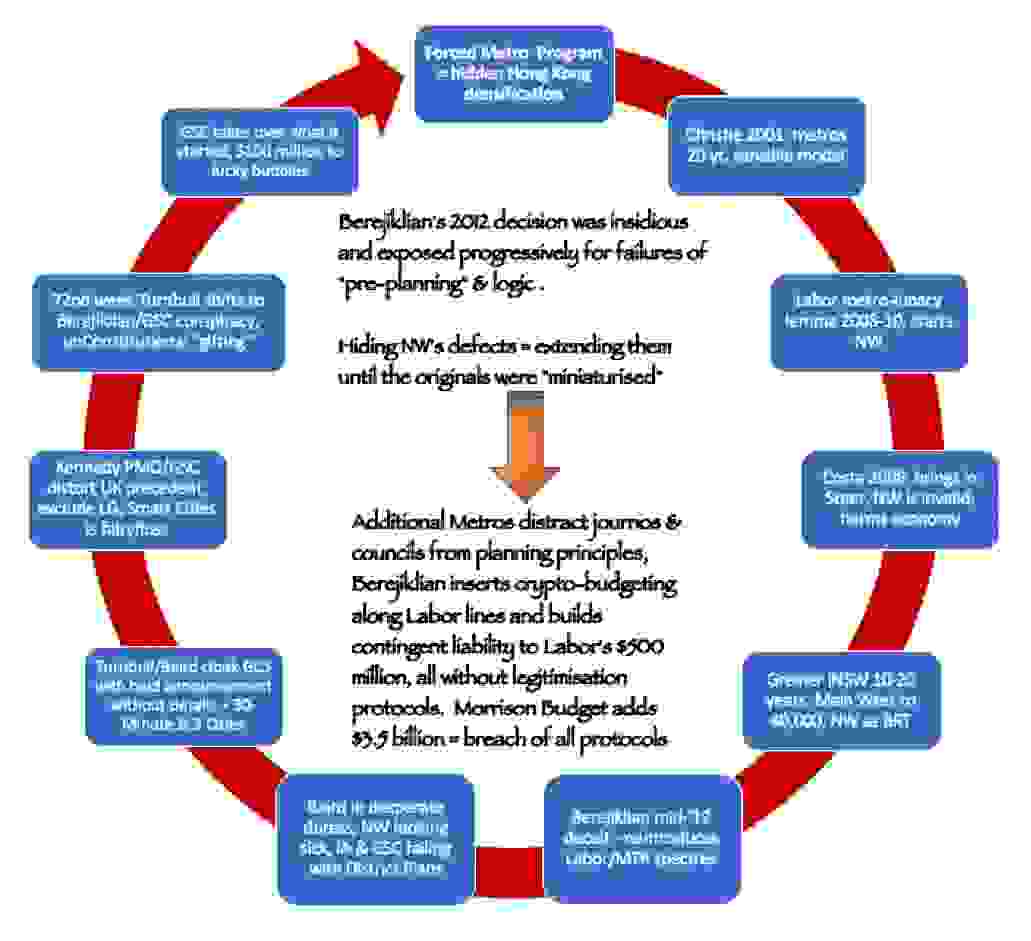 The main agencies “planning” Sydney are un-elected. iA, UrbanGrowth NSW, the Greater Sydney Commission and iNSW cover disjointed bits of the checkerboard but none do “the whole”.

The Baird Government introduced the creation of the Greater Sydney Commission with much fanfare. The Chief Commissioner-elect, Lucy Turnbull, published Sydney A Biography in 1999 which was quoted in the following (somewhat mistaken) terms by the then Planning Minister (the “Movement” had a different meaning to his intention, see below):

Minister Stokes gave the impression he did not understand that the Greater Sydney movement focussed, as its core direction, on taking power off an uncaring and inefficient State Government and giving it to a municipal parliament which would build a spirit of citizenship, a strong taxation base and a positive plan for the future city of 2,000,000.  So we’re clear, in 1894 solicitor and board director Thomas Hughes appeared in the Sydney Morning Herald arguing for a restructuring of local government along the London County Council lines. The Herald editorialised on 11 June 1896,

The NSW Government is finalising its views on the housing densification aspects of the CBD to Bankstown Metro including St Leonards/Crows Nest and presaging a mythical West Metro. The issues are much broader than that. The Metro/s should face a debate over

iA, iNSW and other agencies should be required to publicly address the same and wider considerations arising from not implementing COAG, Commission of Audit, Greiner/Christie’s and my and their own strategic and project standards.

A better way is again the older way:   the Improvement of Sydney Royal Commission and the Cumberland County Council were independent and representative, both. There are too many linkages nowadays between politicians and development interests. The Askin Government established a top-level interdepartmental committee called CUMPTAC then TRANSAC which was continued by Wran Unsworth and then called for by Bruce Baird. This writer was its Secretary in the early 1980s. There was no industry or lobby representation and all interactions were proper and public. The system worked really well – and both Transport and Planning departments had higher productivity and lower costs than today’s mega-agencies. The Minister for Transport, Peter Cox, had no Labor identities or even ALP members on his personal staff. How unlike that is with current practices of lessor repute.

Classic failures of governmental competence were all cycles in the greyhounds fiasco including the final Cabinet approval, Premiers Baird’s then Berejiklian’s metro and tram announcements, and The Spit tunnel. In addition, the cross-membership between agencies and lobbies is extraordinary and has to lead to questions as to what each side achieves that they cannot do through transparent but ethical external Chinese Walls as with TRANSAC. A code of interaction between agencies and lobbies is needed, around these principles:

3. Persons in the target bodies must not

a. Attend meetings at or otherwise advise lobbyists

b. Communicate in any form with lobbyists

c. Accept any favours or gratuities, present or future, from lobbyists

except in accordance with PMC guidelines and real-time, on-line public reporting.

This is an extract from my Master's Thesis.  We record for posterity the view of the long-term Coalition Minister for Transport and Country Party legend, Milton Morris:

The Value Proposition tab describes the effects of the "30-Minute Club" and "The Options the Community Would Love".

Now to get Governments and Oppositions, Sydney City and other councils, lobbies and NGOs, and journalists, to wake up to reality.