Here are some background and some upfront concerns about the governance and operational aspects that will impede proper reforms in bushfire risk reduction and species protection. In fact, we’re wasting our time if the Governments keep going they way they have been and so far refused to change.

At the end there is a matrix of risks with my proprietary solutions.

2. Political attitudes that will impede any and all recommendations

2. I moved with my family to Picton in early 1979, to be greeted by the great Wollondilly fires. The captain at Tahmoor RFS was Max Smith and we were mates and talked. At that time I was reading an American journal that had a lot of content about underground houses and I took a strong interest

3. I was with my family at Anne’s brother’s place in Peakhurst in 1994 when the fire that destroyed the Como Public School leapt the River and was approaching at 40 kmh, 4 kms away. We had  no refuge and were saying goodbye to each other when the wind changed

4. I was living in Katoomba in October 2013 when the first and second rounds of fire broke out, and was on evacuation alert

5. I was aware then of Victorian practices and Phil Koperberg and I tried to persuade the City Council to observe its 2010 housing review, to remove housing allotments from firepaths inter alia, and Rob Rogers to introduce professional interpretative materials to such families – whether seeking to build or re-build. The RFS’s community sessions were jargonistic and obtuse.

6. We were rudely rebuffed by both and I was threatened with violence by Council affiliates. Two prominent ABC journalists deliberately obstructed me and the ABC Board rejected my formal complaint. Phil left the Mountains in anger but later went back

7. We all knew that bushfire risks were spreading and growing after a long period of dry, hot 8-month seasons. I said so in correspondence to the PMs in 2018 and onwards when I offered to fund 10 x national demonstration fireproof houses in Queensland, NSW, Victoria, SA and Tasmania. Recently I offered to the Hon Ken Wyatt MP a model for the employment of some 8,000 traditional landcarers across the same geographical bands as the houses, and separately, funding for a 4thNRL Women’s team based on indigenous players (he welcomed that in a very positive letter but backed off supporting me otherwise). Those requests were and are documented on my websites.

I was also in Newcastle on the night of the earthquake and happened to be appointed as the City’s General Manager in 1996, and helped the final stages of repair as well as preparing the new City Plan, partly to reduce flood risk.

Over the years I came to see the First Nation’s traditional forest management practices as far superior to the RFS’s model. I also talked with eco-architect Nigel Bell about the architectural side of firepath housing. I shall outline the consequences below.

I lived in the Victorian/NSW High County for a long period, as previously visited. In Corryong I experienced 32 consecutive days of over 38 degrees (104 F), as nature was preparing the fireground for the next mayhem.

Political attitudes that will impede any and all recommendations.

This is a sample of correspondence (marked copyright) to the PM and Ministers, on 30 March ’20:

The Morrison Government’s climate agenda is to hide real trends, pretend that credits from past programs can be applied which they can’t, and push corporate solar, wind and geothermal manufacturers and operators as though their own cycle of resource usage and emissions won’t be significant.

There are many good elements but nowhere will a citizen find the benefits from re-engaging the people of our First Nation and employing them in their traditional landcare forest management model.

The Blue Mountains, Victorian High Country, East through to West Gippsland, SA and Tasmania, and the coastal forests of NSW and Queensland, might each need 5 to 10 teams of 100 , to have 7 x 3-week cycles, 2 on and 1 off, moving from tranche to tranche as they decide.

It will take time which will be endless if we don’t start.   The program would have so many benefits but also reduce emissions and community damage, by reducing the spread, intensity and duration of major bushfires.   It would protect native species much better that do the RFS models.

But this might all be a zero-sum game as the Coalition’ federal, state and local cliques are fighting between themselves.   Are they capable of leadership?   Only if Morrison grows in ethics, leadership and skills – and replaces the mercenaries with professionals.

The Australian’s Chris Kenny wrote on 2 May ‘20 “that If the Ruby Princess has been Australia’s single most avoidable slip-up on spreading coronavirus infections, the most unnecessary stuff-up in the societal and economic response has been the way students have been shunned from schools”.

He went on in terms reminiscent of my expose of systemic failures sitting behind “$100 billion over 10 years” and sports and women’s facilities rorts:

"We are making this up as we go along. Those who are certain that other nations have succeeded where we have been left wanting are having a lend. We just cannot be sure yet.*

"Risk mitigation is a devilishly difﬁcult practice for public assessment. Think of Shane Fitzsimmons, who headed NSW’s Rural Fire Service for a decade. It was his job for more than a decade to minimise the bushﬁre risk and maximise the ability to protect lives and property. Yet in the wake of the worst bushﬁre season his state has seen, where limited fuel reduction, bad planning and miscued control burns all played a role in the devastating and deadly outcome, he has been lauded as a hero."

* That cuts both ways, his against restrictions Vs science leading priorities

By the bye, the New York Times has made serious allegations against News and The Australian over the bushfires.

The Guardian and the author of "Burning Bush:  a Fire History of Australia, have delivered well-researched, informative and quite aggressive opinion pieces about Morrison, and it's time Australia was well-informed (Crowe again).  The climate deniers are being progressively exposed as naive, given the stark realities.

The SMH, like News and the TV services, has been publishing excellent photographs but none of its published authors have shown an understanding of practicalities.

Recent coverage of the bushfires has focussed on the extent and severity of the events, the relationship with climate changes, and PM Scott Morrison’s and Deputy PM McCormack’s manic misstatements.

The recent fire season has highlighted two disparate elements. The first is the actual effects of higher temperatures and reduced rainfall, making for more widespread fires. The images of fleeing and burnt animals and residents, and the smoke- and tear-stained faces of the firefighters, will haunt us.

The second is the disconnection between highly self-obsessed and quite inept politicians and the populace. McCormack and Morrison attacked firefighters and farmers for being “greenies” when they were the ignorant ones – forgetting school lessons about Australia’s three Ice Ages. We are going through “continental warning” after a mere 16,000 years of post-Ice Age temperatures.

They said, “People don’t need the ravings of some pure, enlightened and woke capital-city greenies …the “raving inner-city lunatics”.

Their statements enraged whole countries around the world, and their late concessions on climate change convinced no one that they had abandoned their mercantile and religious obsessions for coal mining. The fact is, the louder the warnings, the more vociferous the cries from the streets, the farther the climate deniers retreated into their carboniferous Bubbles.

The lack of preparation for the long-predicted Inferno, including the refusal to purchase additional fire-fighting aircraft, the lazy and haphazard announcements, and the PM’s inability to immediately understand practicalities like replacement housing and reconstruction jobs, reflected those asinine attitudes.

Sydney journalist Nicole Hasham summarised the dominant political direction this way: “... more than a decade of so-called ‘climate wars’ has left a policy paralysis. Driven by short-term interests, power struggles, politicking and blind ideology, the nation’s leaders have fought over and dumped a raft of promising emissions-curbing measures”.

Liberal Tim Wilson MP wrote three years ago: “My interest is public policy … and it is time to have some honest conversations”.  That has not happened.

Add that the Australian Government has a problem talking to locals, or even knowing who the locals are, the NSW Bush Fire Commissioner hearing in the media that the PM was sending in the troops!

Morrison’s city-Liberal and McCormack’s country-Nationals Parties have rejected the better resourcing of local emergency teams along with the more general rejection of UK-style Localism which would bring a sharp focus to managed risks.

Morrison now has no way of blunder-checking options, including new ideas, or repairing the many mistakes.

He, like McCormack, has a chief-of-staff who was a senior coal industry lobbyist. Australia is economically-dependent on coal as a very large exporter, especially to China, and for the generation of bulk electricity.

Such officials are roadblocks to access within government offices.

Imminent are revelations of deliberate, vindictive suppression for four years of a firesafe housing program. That is one of many examples of paralysed policy-making, where the absence of leadership and professional management are palpable and incredibly damaging.

The vast majority of fires are started by lightning. The areas of afforestation are vast, with thousands of vulnerable sites, necessitating a maximum effort on risk zones and on the most effective tools, rather than the current flippery-floppery which is based on PR smoke and make-it-up-as-you-go “administration”.

There are no mechanistic approaches to reducing such risks as preventive backburning is impossible to apply too widely and it causes habitat loss as well as asthma risks.

The resilience of Londoners under terrorist attack and flood, Australians and Californians under eucalypt-fuelled fire, and Pacific/Asian cities facing tsunamis, cannot be doubted. All have records of “nation building”, including high standards of engineering and managerial performance.

In Australia, the normal Westminster balance between political cliques and the professional structures has been replaced by top-down “gifting” to favoured corporates, where gifting indicates graft, nepotism and cronyism. Engineering standards are appalling. This is not good enough when we’re supposed to be planning for future generations.

The only way to approach risk management is through what Australia is bad at – “local solutions to local problems”. This is a UK and Brooking Institute specialty that Australian mercantile manipulators cannot countenance.

We had governments which listened and thought – Churchill and his Australian counterpart Bob Menzies. They had offsiders who acted straight and hard – in War and in nation-building, especially after 1945. We know the world has changed but why do we accept abysmal standards and horrid outcomes for future generations?

As in diplomacy, war, health and education, old-fashioned planning and management are needed and there’s no reason why we cannot demand to have them back.

High-intervention backburning diminishes habitat in a way the Aboriginal practices did not.  Limitations on free burning relate nowadays to asthma costs as much as forest health concerns.

Australia cannot wait two years for a royal commission to report and be part-implemented – but report it must for many reasons.

The media need to acknowledge that the deliberate suppression of a “bushfire safe house” rollout is part of the hubristic corruption of the Turnbull/Morrison Government as well as media rejection of accepted ethics. As is deprivation of a citizen’s right to earn a living for his family from his valid efforts to improve decision-making.

The challenge is to ensure that the bushfires are seen in the context of a broken democracy and that solutions are holistic. It is vital this be achieved in terms of intergenerational responsibility.

Finally, here is my matrix which has to be © as so much of my IP has been stolen, as documented in the Daily Telegraph and Canberra Times: 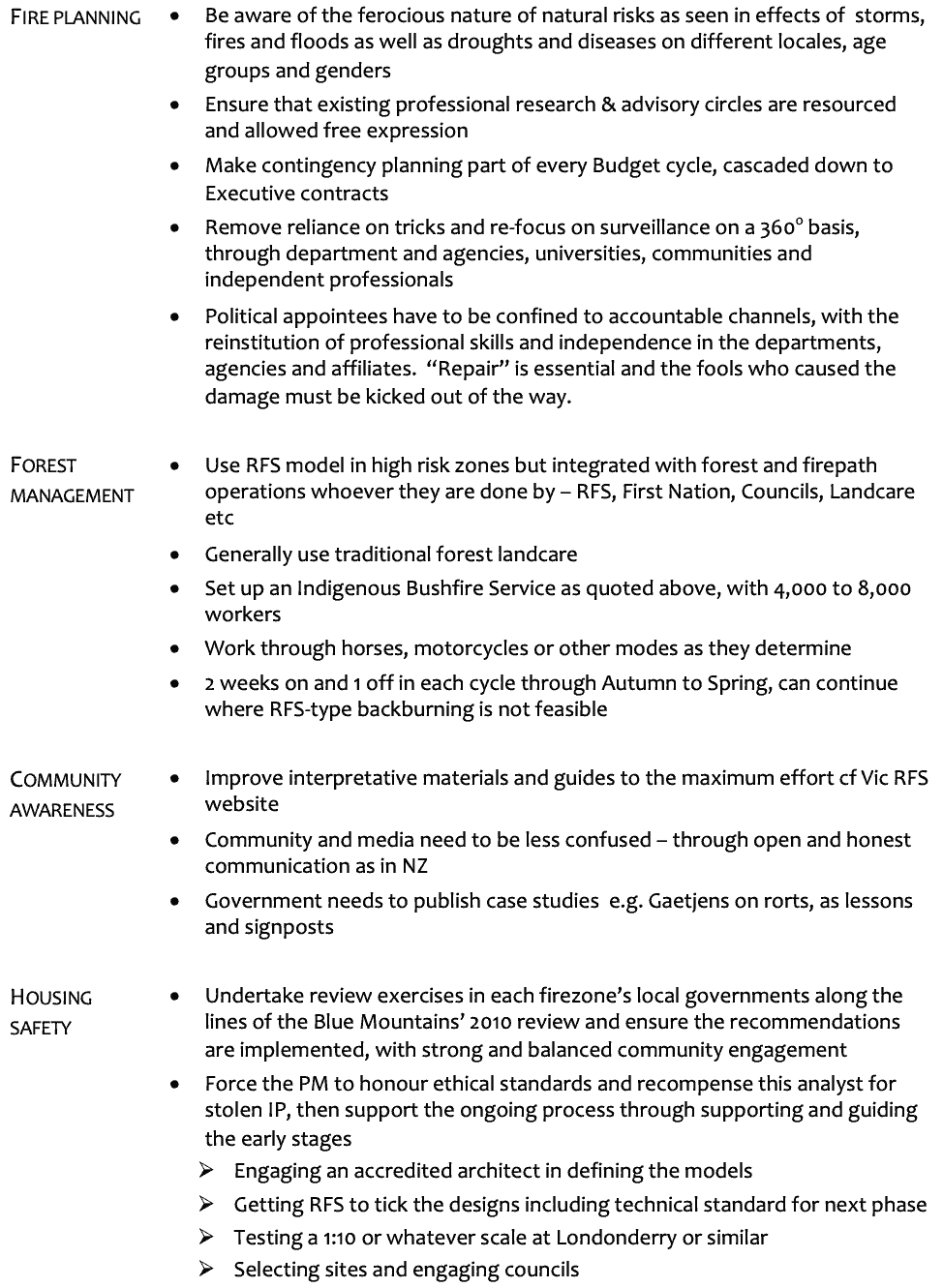